Remember Laxmi, the flower girl I met in Mumbai? She had invited me to her community and join the Diwali festivities. This Monday was the fourth day of Diwali, I believe – but really hard to say since fireworks have been going off for the last week. The day of the big party varies by religious subgroup, but today it was the Gujaratis turn.

We had agreed to meet at the German Bakery in Koreagon Park at 18:00. From there we would take an auto rickshaw all the way to Hadapsar, on the other side of town. And that’s about all I knew about the plans for the evening. There will be food and music, dress nice, Laxmi had said.

I’d told my coworkers the general area I was heading to and what the plan was, and said that if I didn’t send a message every few hours I was probably somewhere being relieved of one kidney and two retinas. It was a joke, but regardless, letting others know you’re ok is the sensible thing to do in a situation like this. It was also good to remind myself that I knew very little about this person who would guide me. Perhaps somewhere in the back of my head a doubt was echoing. It was a risk I had to take, an opportunity I couldn’t pass up because of apprehension. I had made that judgement call in Mumbai, and still stood by it.

I got to the bakery and sat down on a bench. A moment later Laxmi turned up, together with her friend, Rajesh. He looked friendly enough. Didn’t speak a word of English so we went with smiles and handshakes. They had an auto rickshaw ready, so without further ado we departed.

Twenty or so minutes later, we turned off the Hadapsar main road and onto the narrower streets of the community. We got out and walked down the hill to the place where the festivities would be held: a shrine by a small town square, lined with houses and improvised shacks.

As a white man here I get a few stares every now and then, but it’s not as frequent nor as apparent as I thought it would be. But walking down that hill, behind Laxmi and Rajesh, with the locals parting to the sides to make room, I got some very inquiring looks. I didn’t feel unwelcome, but it was obvious that they don’t see people like me that often around there.

By the shrine, they were setting up for the celebration. Laxmi led me further, to one of the shacks by the square. Outside it sat a slightly yodalike sweet old lady, overseeing the chai cooking by her feet; a pan of tea being heated on a camping stove. She was introduced as aunt Nanda. The shack behind her was her home, and had been so for the last 30 or so years.

I was invited in, took off my shoes and stepped inside. The interior was quite spartan, but cozy. A rudimentary wooden framework was holding up the steel sheets that formed the walls and the ceiling. The floor was solid concrete, the slab the shack was built upon, a few rugs here and there. Some shelves were lining the walls. In one corner there was a small shrine. A mouse was scurrying about in the shadows.

I freshened up a bit and changed to my Kurta. Clad in traditional clothing, I was now ready to be properly introduced to the community. We walked around, in narrow alleys dodging clothes lines and lightbulbs, looking in and saying hello in all the homes on the way. Laxmi had dozens of friends she wanted me to meet. They were all super nice and happy to meet me, for a moment there I felt like a real celebrity.

Back at the shrine, the kids were being served dinner. They sat in rows on the square. A man was walking through the files and serving food. While we waited for the grown-ups turn, we decided to have a few beers. Rajesh headed out to the wine shop while we took a seat inside Nanda’s home.

I knew the day was going to be weird, but to find myself sitting on the concrete floor of a shack, drinking beer with old aunt Nanda still came as a surprise. A pleasant one, I might add. We talked a lot, she told me about her life, about some ups and downs. Outside the village festivities were proceeding, fireworks were going off and the children had almost finished eating. Now it was our turn.

Like the kids before us, we also sat in rows. One area had a spotlight shining down on it, and that’s where I was seated. In the limelight. We were served thali with some rice, roti and dessert. Very good!

After dinner the square needed to be cleared and prepared for the dancing part of the festivities. At this point I thought it would be a good idea to let my friends know I’m ok. Well, as luck would have it the entire village seemed to be a Tata Docomo dead zone – both carrier and mobile data showed nil, so I had no way of reaching the outside world. Nice.

While waiting some kids came up and wanted to talk about this and that. One wanted to tell me about his pet chicken, another wanted to know if I knew Hannah Montana. All of them wanted to pose in pictures. Happy kids.

Eventually the music started, and since I seemed to be something of a peculiarity there, I had to go first. I tried telling them that there really is a reason why white men don’t dance, but they weren’t having it. So me and Rajesh’s brother headed out for a boogie. Shortly after many others joined and before I knew it a particularly feisty lady was teaching me the Lungi dance.

And to answer your question: no, I’m not going to perform it by request.

Good times, but it was getting late and I was still on the other side of town, so I thanked and said my goodbyes to Nanda and the rest. As we were heading to the main road via the back alleys we passed another party: tens of teenagers dancing in the street to the same Bollywood music we had heard earlier. When they saw me many of them lunged toward me like a troop of feral monkeys. Somewhat intoxicated, they wanted me to join in on their party, and were dragging me towards into it. Meanwhile Laxmi and Rajesh were pulling me the other way. I smiled and said thanks but no thanks, it was time for me to leave. After some more convincing they gave up and I wished them a good party as we continued towards the road.

I thanked Laxmi for the invitation and for a fun evening, and hopped in the auto rickshaw. Let’s stay in touch! I said before zooming off. During the long ride over to Baner I thought about the evening that had passed. I truly appreciate that I got the opportunity to participate in something so genuine and local, one community’s celebration of Diwali. 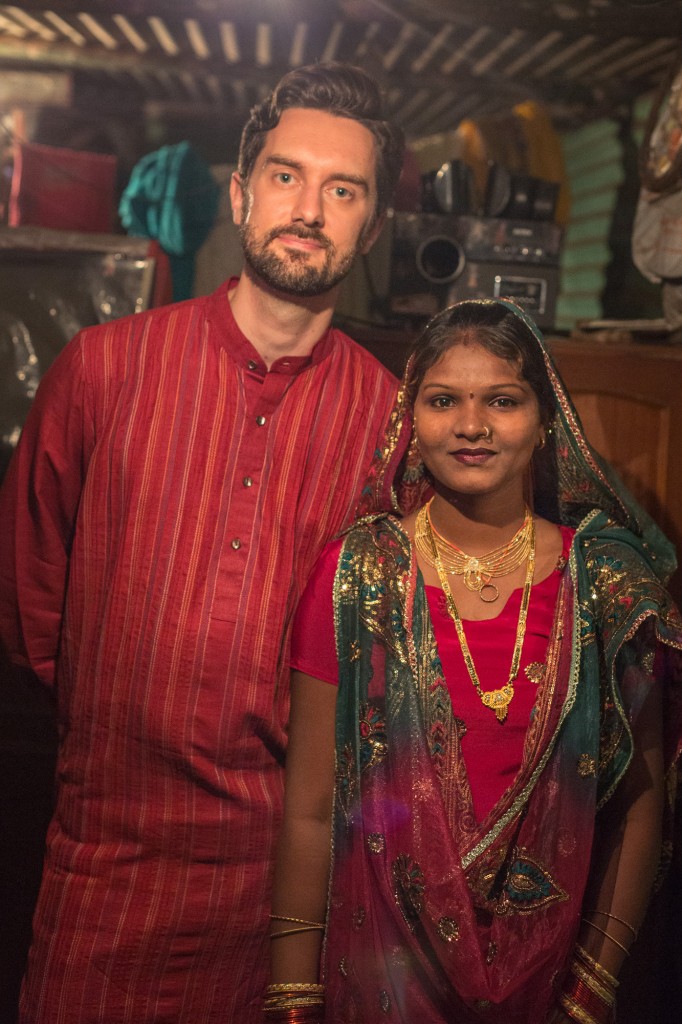 New to this blog? Here's a little background and here's the beginning of the story.